This delicious Pierogi Skillet combines the classic favorite potato and cheddar pierogi with freshly sautéed bell peppers and onions along with perfectly browned medallions of kielbasa. All the best flavors in one pan… Pierogi Skillet dinner is served! 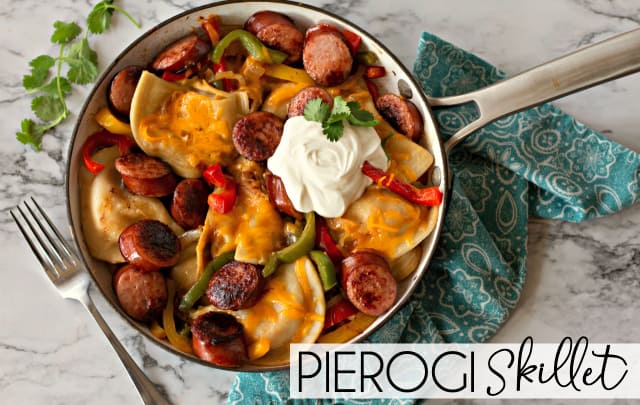 As any respectable Pittsburgh born person of Eastern European descent, I love me some pierogi! Of course, being an American, I’m really most familiar with the mashed potato and cheddar cheese filled variety. But I do think I would be up for sampling all of the traditional fillings. What are your favorite pierogi fillings? Tell me in the comments below!

Homemade pierogi are so incredibly delicious… not to mention time consuming to make! My family has a love/hate relationship with the homemade pierogi. We love to eat them, but not so much make them. Pierogi making always seems to end in some sort of dramatic mini-tragedy.

There was the time when I was a girl that my mom decided to make homemade pierogi for the first time. She checked out a big Martha Stewart cookbook out at the library and set it open on the counter to the pages about how to make pierogi. Then she worked ALL DAY on making those little buggers that kept popping open in the boiling water.

After all the hard work, we had just enough to serve for dinner. My dad tasted one and uttered the words that shall never be forgotten in our home, “wow, they taste just like Mrs. T’s frozen pierogis.” We now think he might have though it was a compliment. If that was the intent, my mom certainly didn’t accept it as such! And now we will never let dad live this down! It’s just going to have to be one of those family stories we tell every time we talk about pierogi.

Then, years later when I was an adult, I took my husband to a pierogi making class at a kitchen shop. The poor guy struggled with the whole process. The instructor offended him by suggesting his hands might be too hot for the dough. Why this offended him, I’m really not sure. Once he finally got his dough rolled out, the lady next to him spilled her water on his dough and he had to start over.

When he eventually got his pierogi pieced together, he went to the cooking station to cook them. I checked in on him and noticed he was frying them already… without boiling them first. Oops! Poor guy. His pierogi making days ended on day one.

The next Christmas I decided to make homemade pierogi for my family and burned the heck out of my finger when melting butter.

Soooo… maybe homemade pierogi are a thing we should buy when in the Pittsburgh area.

So, about frozen pierogi… they are great! I was raised on Mrs. T’s frozen pierogies. We ate them for dinner several times a month.

First, we boiled them in water until thawed. Then we sautéed them in butter and chopped onions until golden brown on both sides. I’ve never had a pierogi outside of my parents house that was cooked until the dough browned, but it’s so good this way! The dough gets crispy and delicious.

We always served pierogi with salt and sour cream and now I can’t eat them without those two things.

If for some reason you can’t find Mrs. T’s in the grocery store, you can actually order a case on Amazon. (affiliate)

Because of my love of pierogi, I created this delicious Pierogi Skillet. It blends together kielbasa, bell peppers and onions with pierogi. This is a full pierogi dinner your family will love!

First, I used fully cooked polska kielbasa. I shop at Kroger, so I used Kroger brand and it was both cheap and delicious! 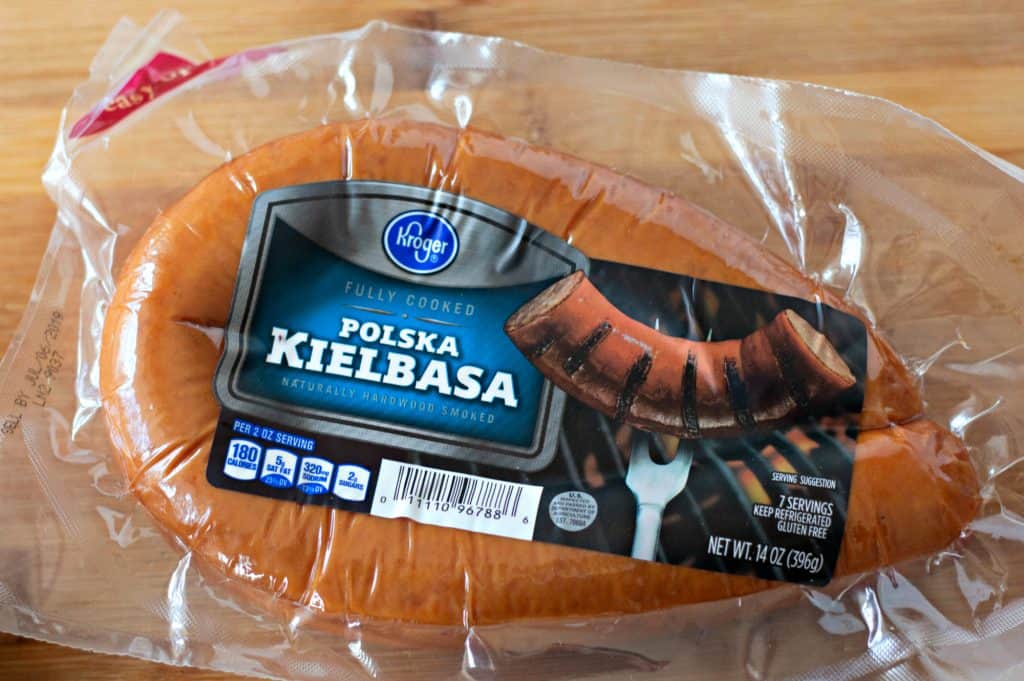 Side note: if you like kielbasa, click here now to see my SUPER popular recipe for Kielbasa and Potato Skillet. It’s pretty easy to make and really economical.

I sliced the kielbasa on a bias into bite-sized medallions: 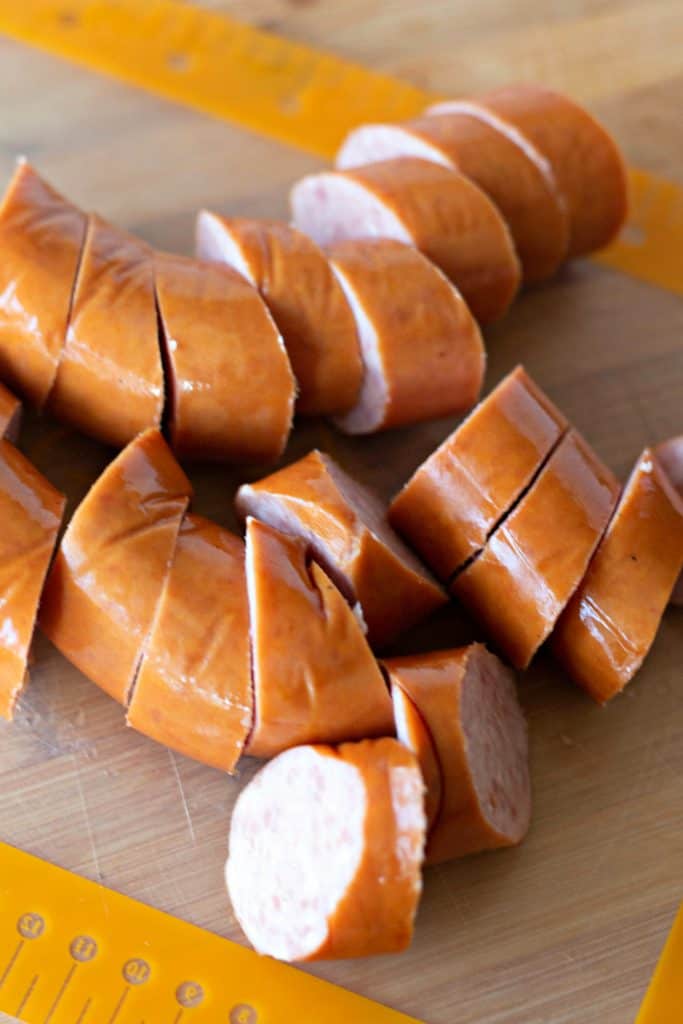 Then I heated olive oil in a large skillet over medium heat and fried the kielbasa on each side. I like them to be browned because it adds so much flavor. 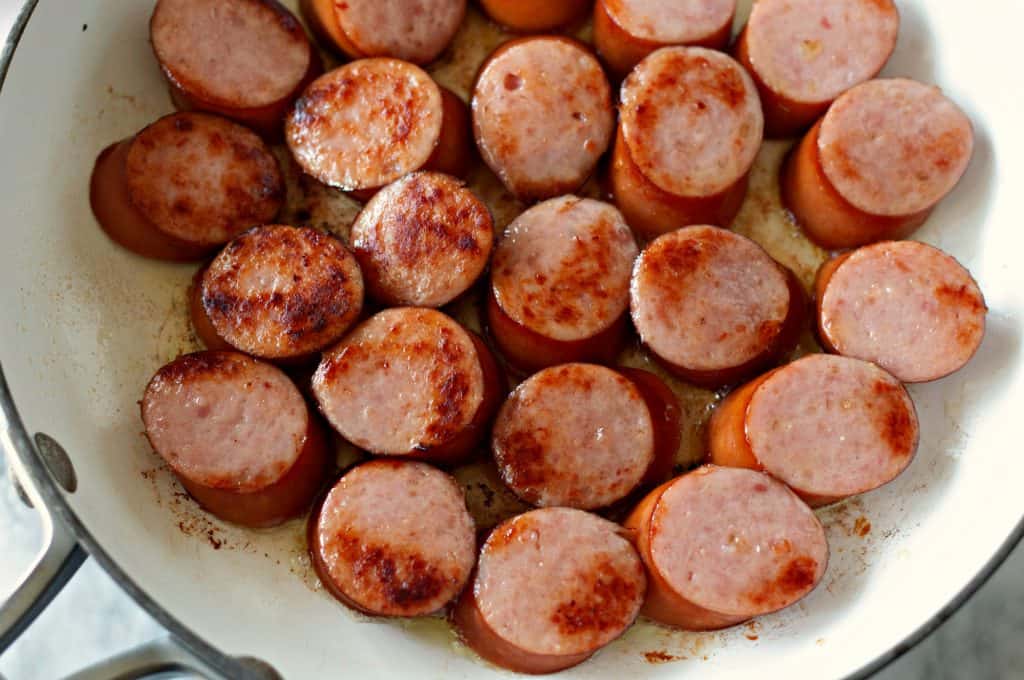 Next, the veggies! I like to use three colors of bell peppers. It’s visually appealing but also is a good thing to get a variety of colors into your diet from fruits and vegetables. 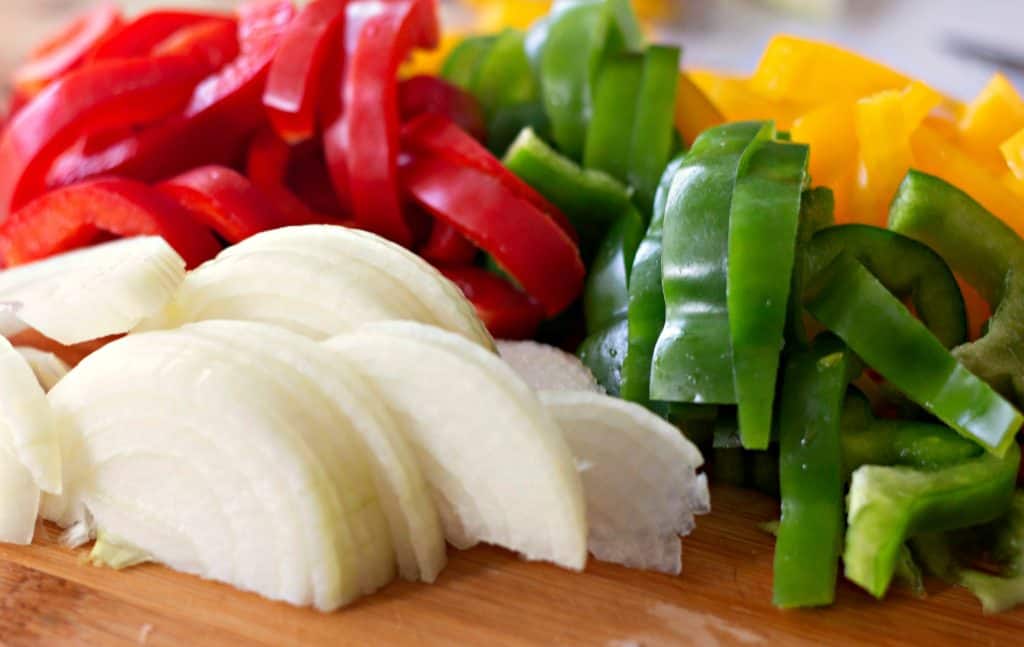 The onion and bell peppers went into the same pan that I had used to cook the kielbasa. I sautéed them until they were softened. 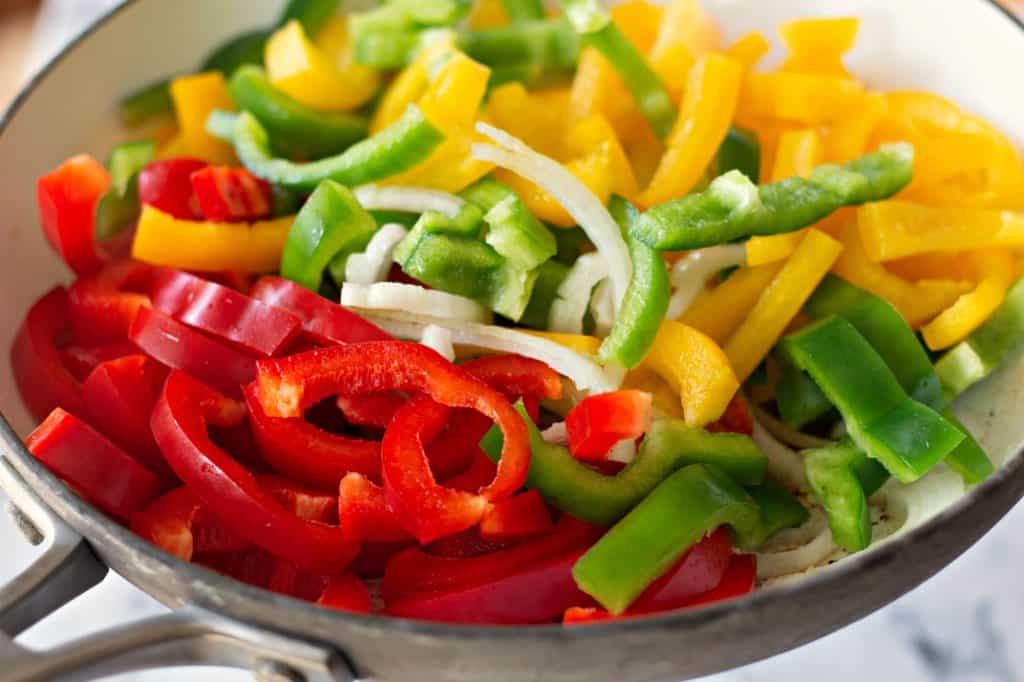 While the peppers and onions were sautéing, I boiled the Mrs. T’s pierogies according to the package directions. 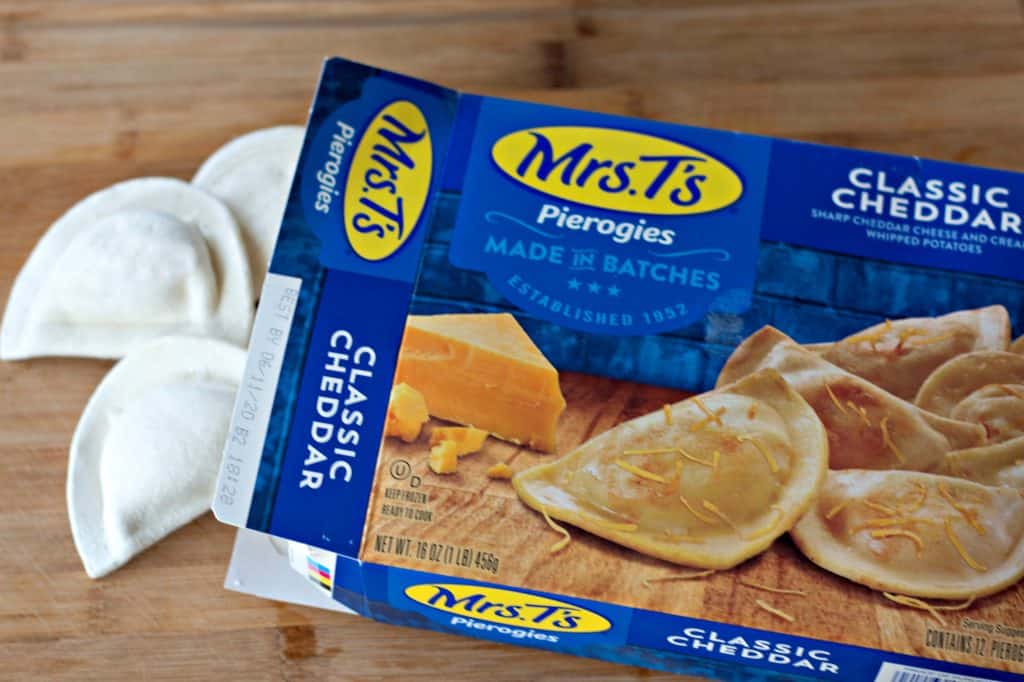 After they were boiled, I added them to the skillet with butter and sautéed them on one side until they began to brown a bit. Then I flipped them all over and added the kielbasa, bell peppers, and onions back to the skillet. Use a spatula to gently toss everything together in the pan.

Finally, I sprinkled shredded cheddar cheese over the top and allowed it to melt before serving. 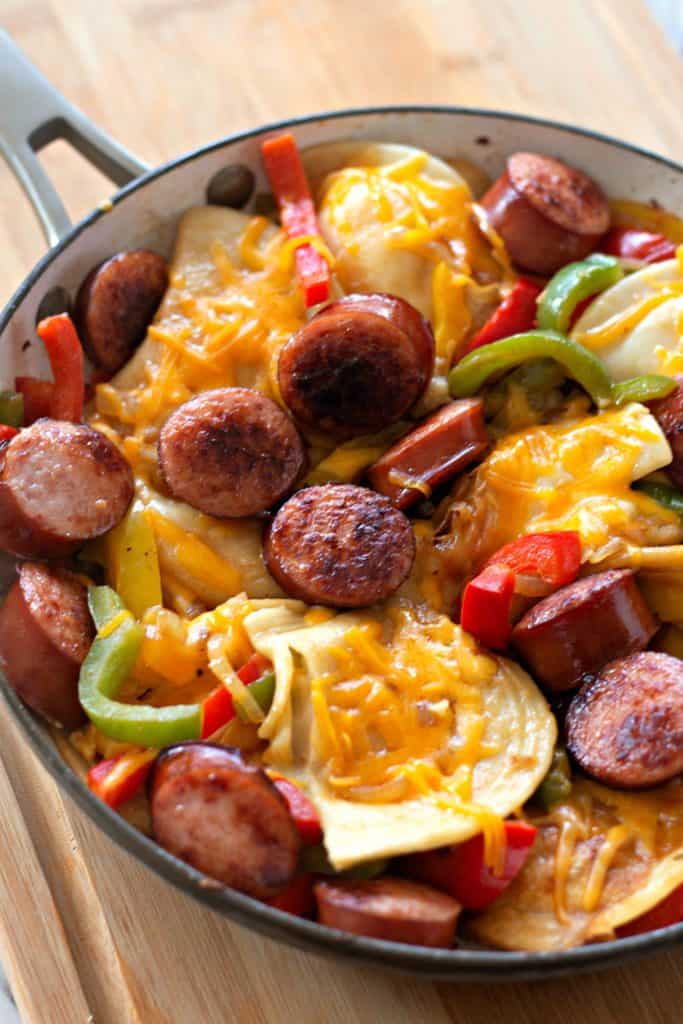 Oh my goodness… so yummy! 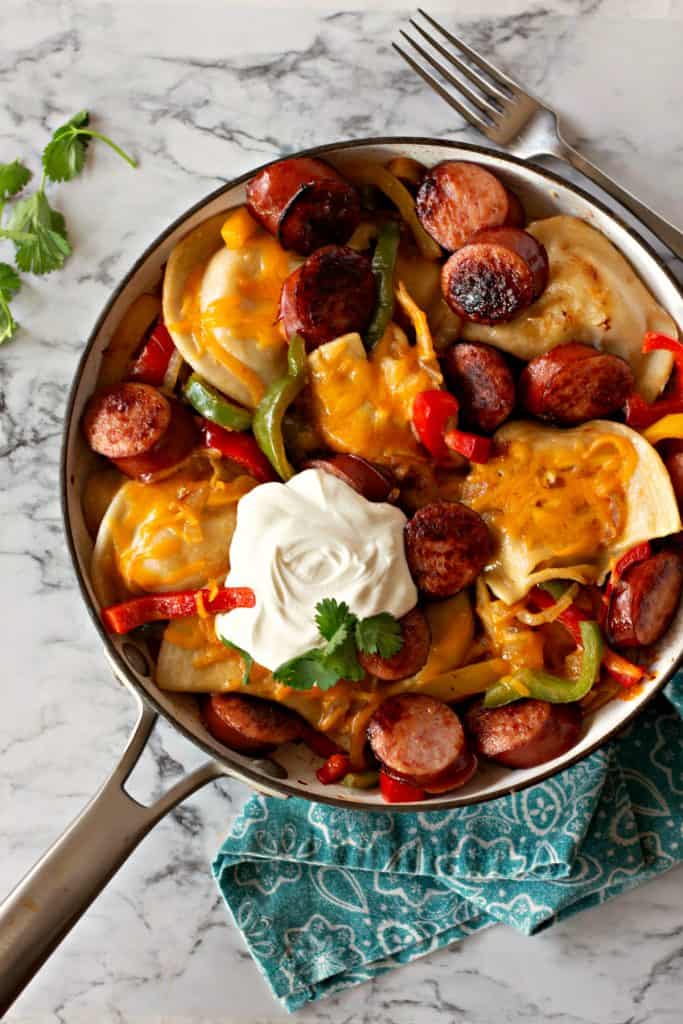 Of course you’ll want to serve the pierogi with plenty of sour cream and some salt on the side. Some also like to add a sprinkle of black pepper. 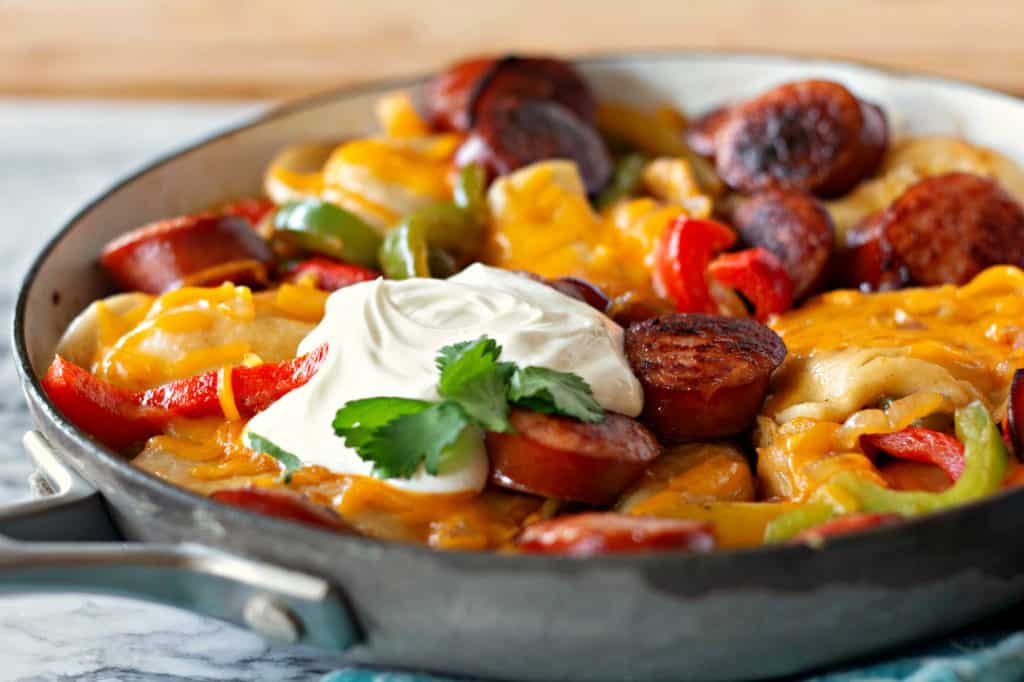 This delicious Pierogi Skillet combines the classic favorite potato and cheddar pierogi with freshly sautéed bell peppers and onions along with perfectly browned medallions of kielbasa. All the best flavors in one pan… dinner is served!

Mrs. T’s makes a mini pierogi, and these would also be great in this recipe. 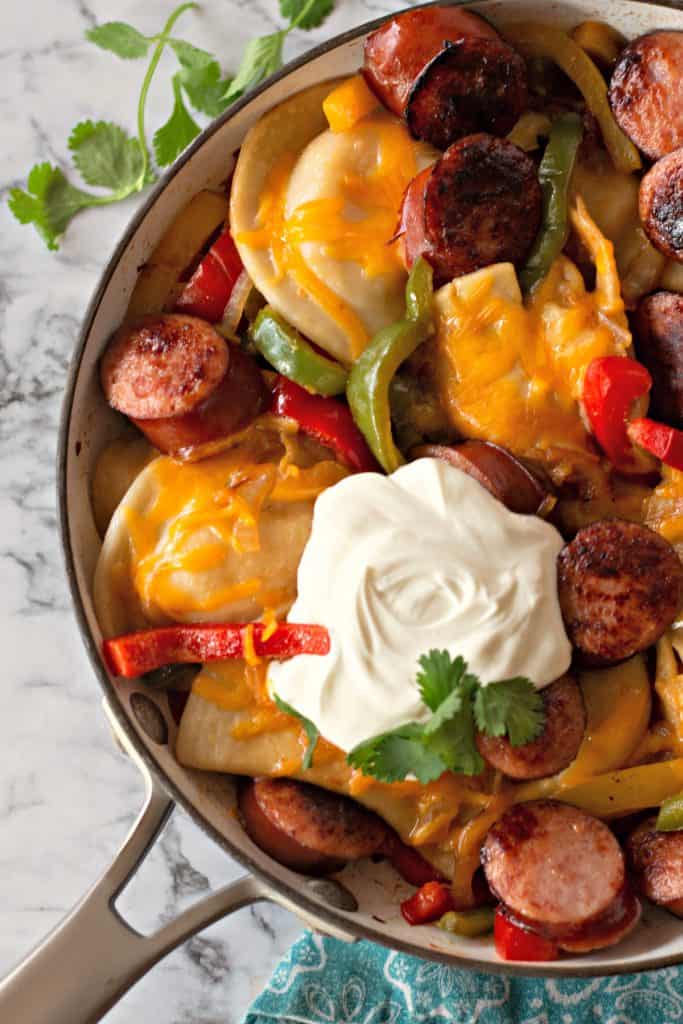 All the Pierogi Lovers

Try making this Pierogi Skillet in your own home and come back to tell me how you liked it! You can leave a comment below in the comment section.

Also, snap a picture and add it to the pin of this recipe on Pinterest so we can all see how it turned out! 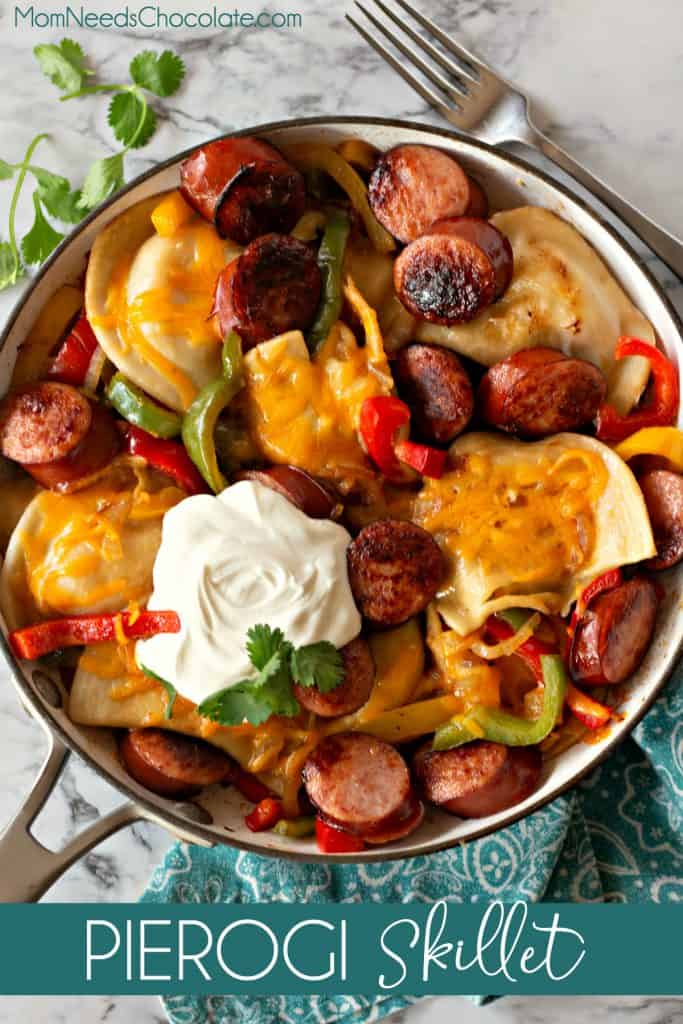