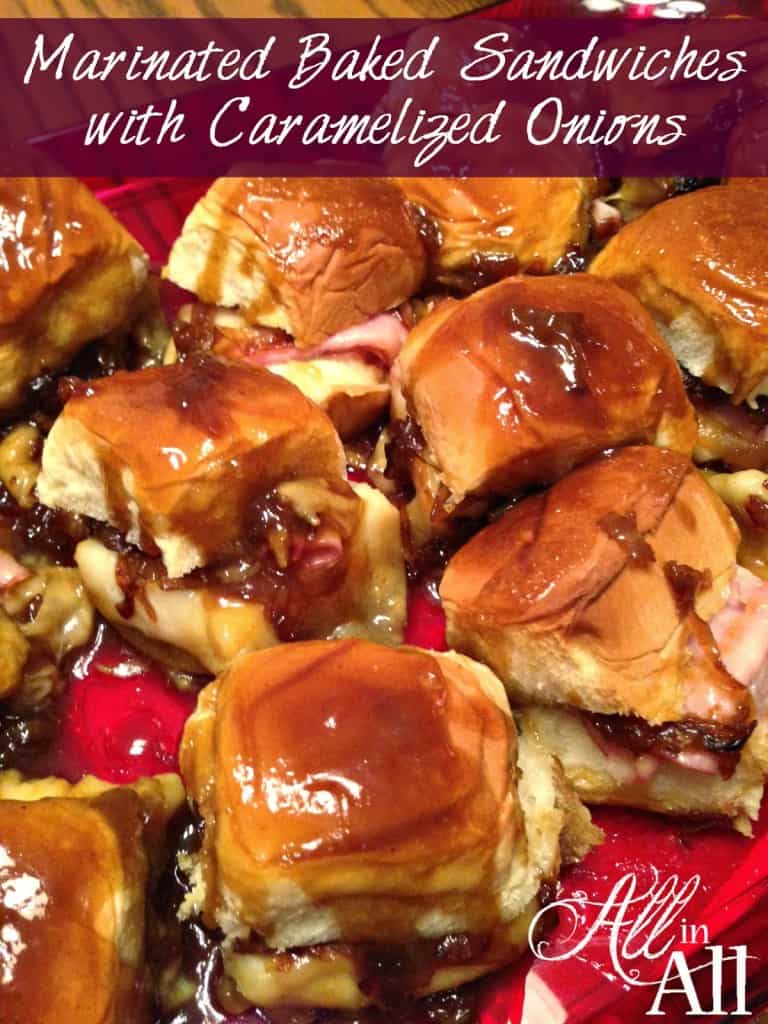 I know everyone’s on a diet right now, so pardon me for enticing you with this crazy yummy recipe right after New Year’s. With Super Bowl coming up soon, I thought I just had to share this awesome recipe with you!

I developed this recipe based on a sandwich I ate at a Christmas party. It was reeeeeediculous! Best sandwich of my life kind of good. I didn’t get the recipe but got a quick list of the ingredients and thought I would try to come up with something similar on my own. What I came up with is incredible and I made them several times this past Christmas.

Caramelizing onions takes a looooooong ggg g time. Start on that process a few hours before you assemble your sandwiches. I’m not joking. If you rush the caramelizing process it won’t be good.

One awesome thing about these sandwiches is that you can actually put them together the day before you need them. As they sit in your fridge they’ll marinate in the sauce and become even more delicious. Don’t have time or fridge space for that? No problem. I made them once without allowing them to marinate more than a few minutes and they were just fine.

Here are the sandwiches all assembled and ready to bake: 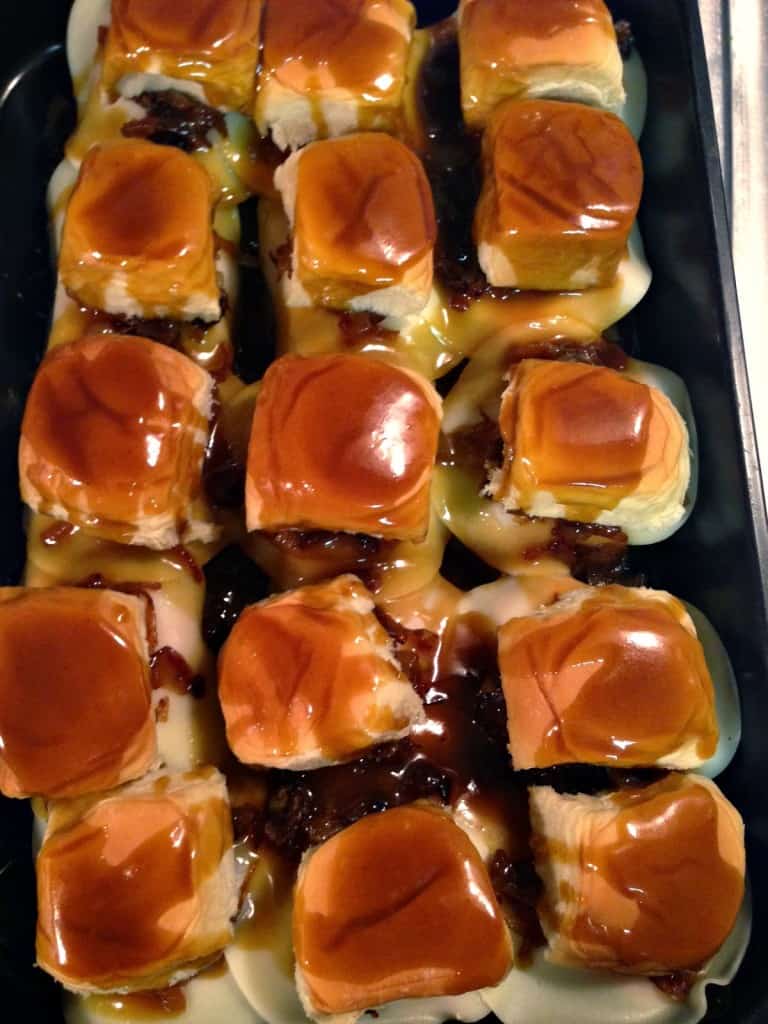 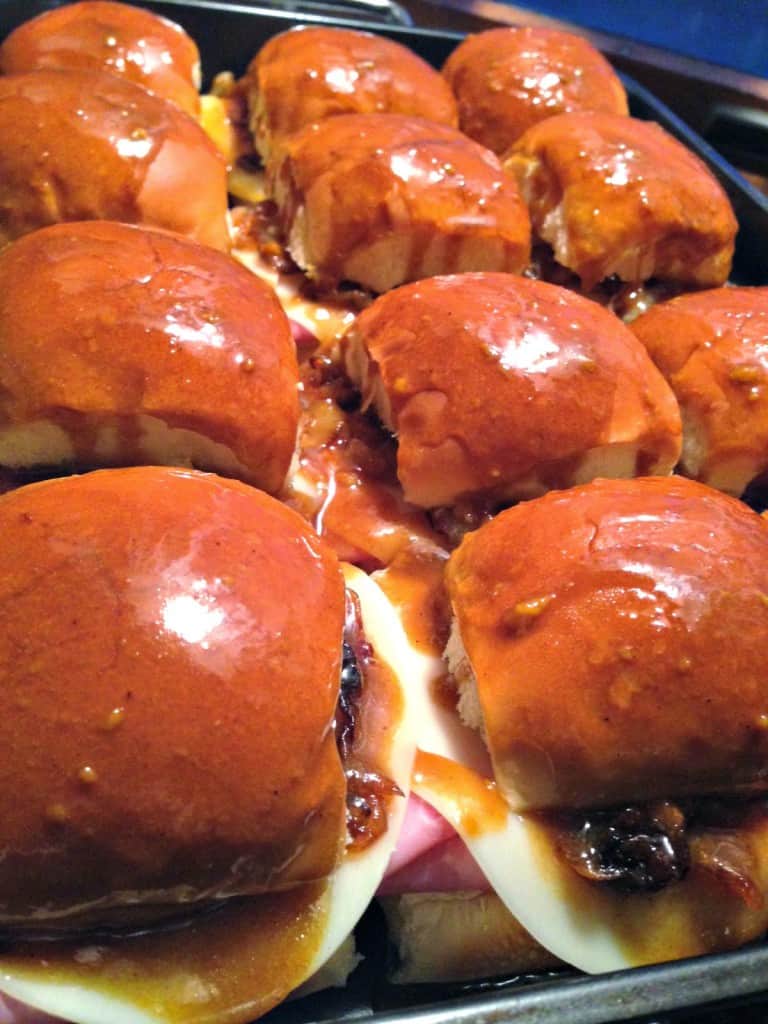 Here they are all baked up and ready to eat: 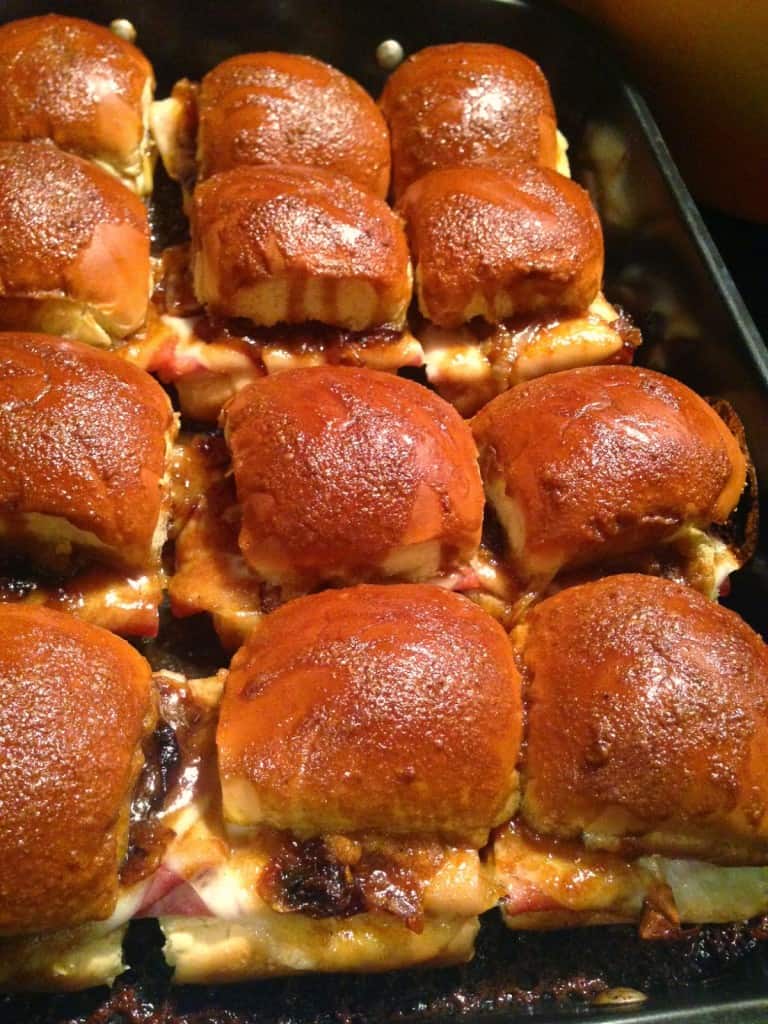 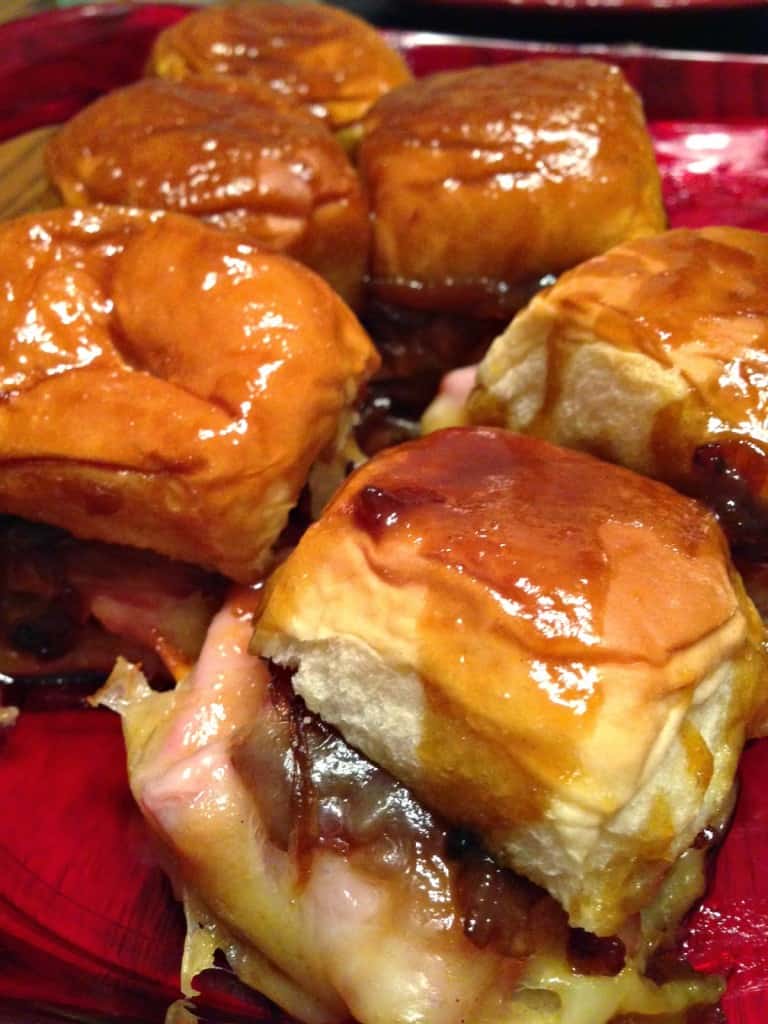 5 medium to large size onions, peeled and sliced thinly (it will seem like a lot of onions, but they will reduce in volume by about 75% while cooking)
2 tablespoons olive oil
1/2 teaspoon salt
1 tablespoon sugar
24 Hawaiian dinner rolls
24 slices of provolone cheese (thinly sliced)
18 ounces of thinly sliced deli meat (I do half of my sandwiches with turkey and half with ham)
1 cup (2 sticks) butter
1/3 cup brown sugar
1 teaspoon onion powder
1/4 cup mustard
1/4 cup Worcestershire sauce

1. In a large pan, heat the olive oil over medium heat for one minute. Add the onions and reduce the heat to medium low. Cook gently, stirring often, until the onions become translucent. (Caramelizing onions can take a couple of hours, so be patient.)
2. Once the onions have begun to cook down and are translucent, add the salt and white sugar. Continue to cook the onions over medium-low to medium heat, stirring often, until they’re caramel brown. Remove from the heat and set aside.
3. Slice the Hawaiian rolls to make sandwich buns. Place the bottom halves in two 9×12 baking dishes (you may want to line the dishes with foil for easier cleanup). Top the bottom halves of the rolls with the deli meat and then a slice of cheese. Spoon the caramelized onions onto each sandwich. Top each sandwich with the top half of the roll.
4. In a small pot, combine the butter, brown sugar, onion powder, mustard, and Worcestershire sauce. Heat over medium-high heat and whisk until combined. Allow the mixture to simmer for one minute, stirring occasionally, then remove from heat. Pour the sauce evenly over the sandwiches.
5. Allow the sandwiches to sit for at least 15 minutes before baking to absorb the sauce. You could also cover the pans with plastic wrap and refrigerate the sandwiches for up to 24 hours before baking.
6. Bake the sandwiches at 350 for about 20 minutes.
Makes 24 slider sandwiches (8-12 servings)

TIP: Be sure not to bake these (or most anything really) on the bottom rack of your oven. The buttery sauce could easily burn, so keep an eye on these sandwiches as they bake.